Mandageria fairfaxi is an extinct sarcopterygian predatory fish of the Late Devonian period that grew up to 2 metres in length.

Mandageria fairfaxi was first described in 1997 (Johanson, Alhberg,) and it is the largest fish to be found in the renowned Devonian fossil beds of Canowindra, Australia. It was a predator with a similar morphology to modern Pike - although they are not directly related - and, like the Pike, it was capable of rapid bursts of speed, driven forward by a powerful broad caudal fin and torpedo shaped body.

The most distinguishing feature of sarcopterygians are the lobe-fins that contain rudimentary bones which correlate with the limb bones of all land vertebrates (eg. humerus, radius, ulna). These fleshy limbs may at first appear cumbersome but in conjunction with the swim bladder they allowed the fish to hold its position underwater, waiting on passing prey. Mandageria would have been a formidable ambush predator. 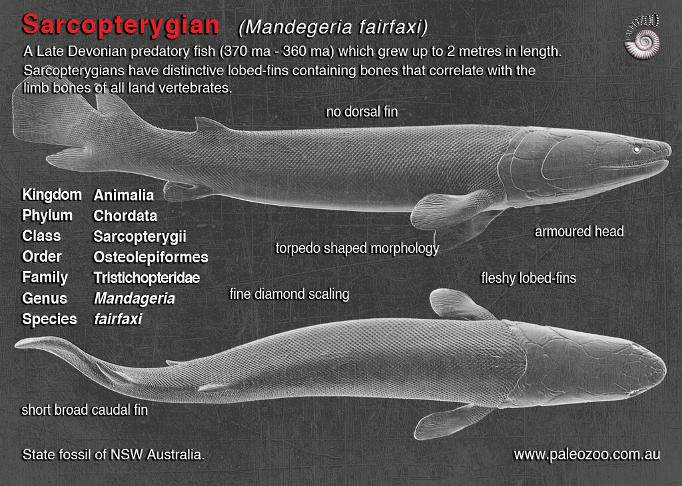 The evolution of the lobed-fin and swim bladder allowed for the further development of limbs in general which in turn opened up the possibility of vertebrates moving onto land.

The swim bladder is thought to be a re-adaptation (exaptation) of a rudimentary air-sack that evolved in the throats of early fish - so as to survive in de-oxygenated water. Over time this evolved into the swim bladder of bony fish which is essential for achieving neutral buoyancy and it is one of the features that distinguishes bony fish from sharks.

Examinations of the fossilised skull of Mandageria have indicated that it may also have had the ability to partially lift and turn its head (Johanson et al, 2003), which may represent another important step in evolution of the vertebrate neck.

The similarity between Mandageria and Pike is regarded as an example of evolutionary convergence - where unrelated organisms arrive at similar evolutionary adaptations.

With thanks to Dr Alex Ritchie for assistance with anatomical  detail.