Diplocaulus magnicornis is an extinct lepospondyl amphibian from the Late Carboniferous through Permian periods (300 - 250 mya). With its unusual boomerang shaped head Diplocaulus has become one of the most recognizable creatures of the Paleozoic era.

D. magnicornis is the most common member of the genus and it was first described by Edward Drinker Cope in 1882. Fossil remains have been found in large numbers in the Red Beds of Texas and also in Morocco suggesting that Diplocaulus was a successful amphibian at a time when amphibians were the dominant vertebrates of the land water margins. This would indicate that its unusual morphology was a successful adaptation and not an evolutionary anomaly.

A number of hypotheses have been put forward to explain the unusual morphology of Diplocaulus' skull - ranging from its possible use as burrowing tool to a defensive adaptation that made it hard for a predator to swallow. Another hypothesis is that it provided lift when swimming -working as a kind of hydrofoil - suggesting that Diplocaulus may have been an active predator swimming up through the water column to engulf prey in its large toothed mouth. 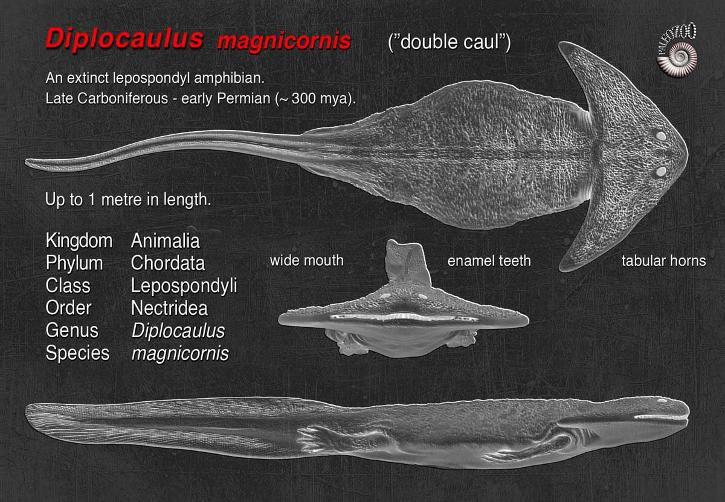 Yet another hypothesis is that the pronounced horns functioned as gill protection - allowing for larger external gills that would have provided additional oxygen uptake and increased agility.

It may be that it was a combination of these and otheradaptive traits that helped to shape the unusual morphology of Diplocaulus - for now it remains a mystery.