Eryops megacephalus is an extinct amphibious temnospondyl from the late Carboniferous period (300 ma) which grew up to 3 metres in length. With a massive mouth and powerful limbs Eryops would have been a formidable predator. 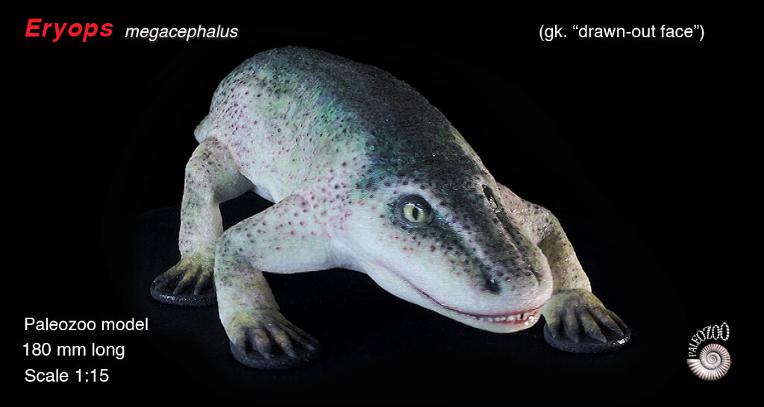 Discovered in the mid19th century in the Texas Red Beds, (Cope, 1878) Eryops was quickly recognized as a large amphibious predator of the early Permian period. Subsequent fossil discoveries have placed Eryops further back in time to the late Carboniferous (Lucas, et al, 2010). There would have been many tetrapoda moving between land and water by this time but very few that could have matched Eryops for size and power. It's pelvic and pectoral girdles were massively proportioned. It also had a huge head and wide mouth filled with long, enamel teeth. Though squat in appearance Eryops would have been extremely powerful.

Eryops had a thick hide covered in hardened, oval tubercles (Romer, 1941) that would have provided good protection against other predators. Even so, as an amphibian with porous skin, it would have had to live in or near water. Unlike reptiles, amphibians are not amniotes so they have to lay their unprotected eggs in water. Although powerful in build Eryops would have been cumbersome on land so would also have been more agile with the assisted buoyancy of being partly submerged. The morphology of Eryops suggests a lifestyle of wallowing and huntingwithin water margins - in much the same way as the modern hippopotamus - intermittently venturing out onto land in search of additional prey. 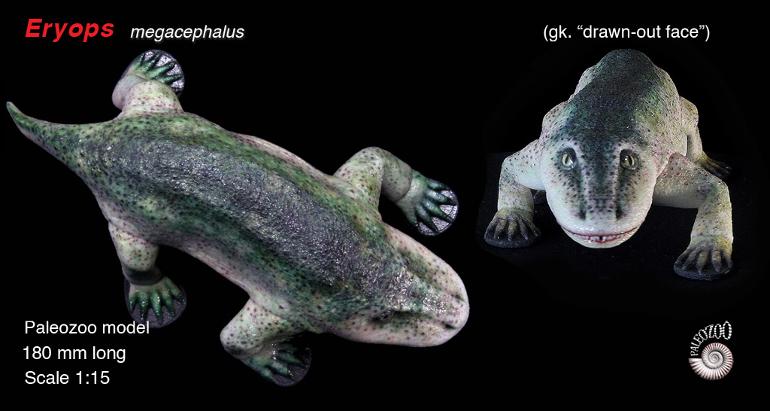 In addition to the hard enamel teeth around the margin of the wide mouth, Eryops also had backward facing fangs on its upper palate. These would have been used to grip onto prey as Eryops lunged forward and lifted its head backwards - the same method used by modern crocodiles.

There may have been a time during the late Carboniferous period when amphibians like Eryops megacephalus were the apex land predators.