Opabinia regalis  is an extinct stem group arthropod that lived during the Middle Cambrian period. Its unusual morphology includes a barbed proboscis, 5 stalked compound eyes, 15 imbricating biramous lobes that run the length of a segmented body which terminates in a fan-like tail.

Opabinia regalis was first discovered in the Burgess Shale by Charles Doolittle Walcott and he published the first description in 1912 - classifying Opabinia as a putative annelid. However a future more detailed description (Whittington, 1975) revealed that it was hard to place Opabinia within any existing phylum or order of creature. This realisation helped spark a great debate about the nature of the Cambrian Explosion which continues to this day. Opabinia is now thought to belong to a stem group of arthropods, (Zhang, Briggs, 2007) only indirectly related to the equally unusual Anomalocaris and possibly to the extant Tardigrades. 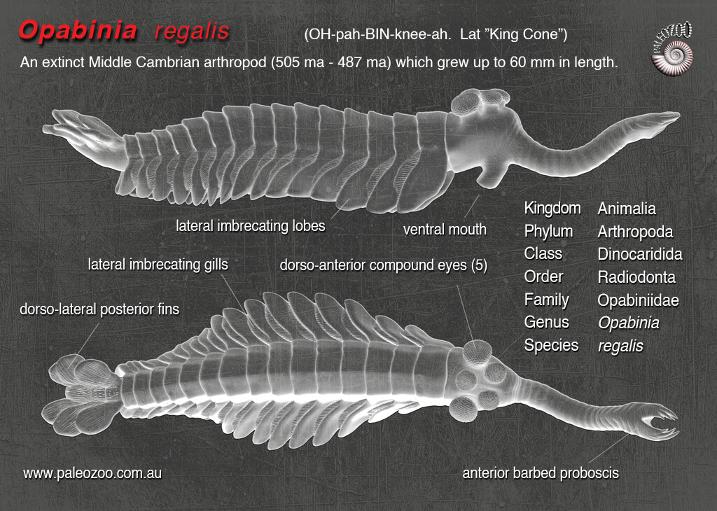 Even thoughOpabinia is thought to have been a benthic scavenger - caught up in one of the underwater mud slides that formed the Burgess Shale - it was still probably quite agile and capable of evading predators whilst foraging about.

It is tempting to regard Opabinia and other long extinct creatures of the period as failed evolutionary "experiments".  However, lifeforms tend to be abundant and stable until disrupted by such things as environmental change or predation. Species extinction tends to be brought about by external forces rather than any inherent "design" fault.

It may be the case that Opabinia thrived for many millions of years without leaving any trace. The fossilised remains of such soft bodied creatures are so rare as to make it impossible to draw any clear conclusions. There are indications from other fine lagerstatten deposits around the world that soft bodied creatures did prosper alongside the harder shelled arthropods whose remains are more evident and that some lineages extended far into later periods (Kuhl, et al, 2009). The collections of hard bodied fossils from around the world represent just a small fraction of the life that was present at any one time.

With thanks to Jean-Bernard Caron for assistance with anatomical detail.